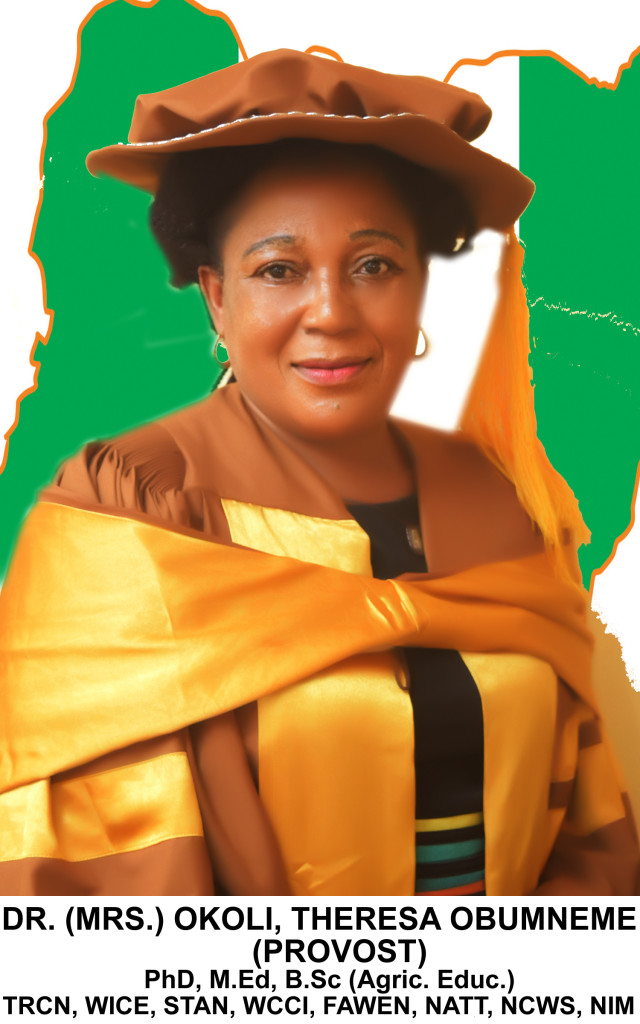 Dr Tessy Obumneme  Okoli is the 4th Substantive Provost, Federal College of Education (Technical) Umunze, Anambra State. On her appointment on May 17, 2018 by President Muhammadu Buhari GCFR, she became the first staff of the College to rise to her career peak as Provost.  She is also the National Secretary, Association of Women in Colleges of Education (WICE) in Nigeria.

She emerged the best graduating student, Department of Agric Education, Anambra State College of Education in 1988. She further bagged her first degree in Agric Education from the University of Nigeria, Nsukka (UNN) in 1990 and obtained her M.Ed in 1995 from the same university. She also obtained Ph.D from the Enugu State University of Science and Technology (ESUT) in 2011.

Dr Okoli, a strong advocate of women education and empowerment, joined the Federal College of Education (Technical) Umunze on March 3, 1992 as an Assistant Lecturer in the Department of Agricultural Education. She rose through the ranks to become a Principal Lecturer in 2007 and later Chief Lecturer on October 1, 2011.

Before her appointment as Provost, Dr Okoli had served the College in various capacities for the past 26 years. During that period, she mentored and inspired hundreds of young people to obtain higher academic qualification.

She served as the National Commission for Colleges of Education (NCCE) Resource Person of Accreditation Team to FCE Eha-Amufu in 2016. 1n 2016, she served as a Consultant on Capacity Building in the Fadama III AF World Bank Assisted Project.  She also served as a Resource Person in Special Modular Agricultural Science Workshop for the Science Teachers Association of Nigeria (STAN) in 2012.

She is currently the National Secretary of Association of Women in Colleges of Education (WICE), a position she assumed since 2016. She is also the Chairman, Forum for African Women Educationalist of Nigeria (FAWEN), FCE(T) Umunze Chapter, an organisation that champions literacy campaign among Nigerian women and vulnerable groups.

In 2019, the University of Nigeria Nsukka (UNN) conferred a distinguished Alumni Award on Dr Okoli in recognition of her remarkable contribution in promoting Technical, Vocational Education and Training (TVET) in the country. She was also named the TVET Expert of the Week by a Norwegian Magazine, Lucubrate for her passionate drive for skills acquisition and entrepreneurship education in the country.

She also bagged an excellence in leadership award by the Women in Colleges of Education (WICE), South East Zone, as well as Eminent Christian Award by the Christian Association of Nigeria (CAN), Women Wing, Anambra State Chapter.

Dr Okoli added another feather to her cap in 2019 when the Colleges of Education Academic Staff Union (COEASU), South East Zone conferred on her a labour friendly award in recognition of her peaceful disposition to labour issues and according staff welfare a deserved priority.

A good manager of men and resources, Dr Okoli is a goal getter. Under her watch as Provost, the Federal College of Education (Technical) Umunze, Anambra State, was rated first among the 21 Colleges of Education in Nigeria by the Presidential SERVICOM Assessment team during the 2019 exercise. Within one year in office, she secured the NCCE approval of additional six new NCE programmes in FCE(T) Umunze, and also the approval of the College as a JAMB CBT Centre.

She is an erudite scholar, who has made valuable contributions to the nation’s knowledge economy. She has over 65 publications in reputable academic journals, and several chapter contributions in books and research papers presented at reputable local and international conferences.